Showing posts from August, 2008
Show all

A Return to Weekly Geeks 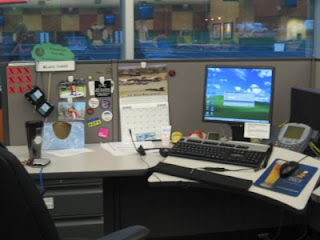 So I haven't done this in a while. This week's theme is a photo tour of your bookish life. Fun!!

So i read a bunch at work; here's my desk.


The side of my couch that usually i read on, complete with comfy pillow stolen from the bed. like my side tables?


the one bookcase i own, full. the smaller one holds movies.

the shelf of the window in my bedroom. most are unread.

and here's the boxes of stuff, almost all books, mostly read.

- August 26, 2008
Wonderful stuff but i though Joss Stone was English?

- August 25, 2008
Am really excited about joining back up for the new RIP 3 challenge. While I have been blogging about what i've been reading since February 2007 i didn't find out about the reader blog community until last August. The first challenge i joined was RIP 2, so i blame Carl V. completely for any challenge anxiety i've had, as well as my giant TBR shelf! :) This year rather than a list he suggested a pool so here's mine!

The Dracula Dossier by James Reese- it's and ERC from Librarything!
Season of the Witch by Natasha Mostert- i actually won this during last year's RIP and just haven't gotten to it yet!
Twilight by Stephanie Meyer-I've been trying to read this for 6 months!Gothic by Deborah Noyes- a series of short stories, YA by my understanding.
Rises the Night and The Bleeding Dusk by Colleen GleasonJonathan Strange and Mr. Norrell by Susanna Clarke- another one that's been on my shelf a whileThe Historian by Elizabeth Kostova- i started this in January…
7 comments
Read more

- August 24, 2008
While I personally had hoped for a non-male choice, I have enjoyed hearing Joe Biden speak for the last several years. Personally he seems honorable and intelligent. I know some progressives feel there are "issues" with him but i don't know that any candidate anywhere, electable or not, would match up perfectly with every single segment of the progressive community.

- August 19, 2008
I finished the latest Artemis Fowl novel, The Time Paradox by Eoin Colfer. I am really starting to like Artemis. He's grown so much from the first novel. He begins the first book as an obnoxious, criminal genius 10-year-old and ends this latest as a strong, thoughtful 15-year-old. I've really started liking him in the last 2 books as he's made friends, has a conscience, and is even getting a bit of a "save the world" mentality. In this one, Artemis and Holly go back in time to rescue a lemur that is the only cure for Artemis' mother's illness. And they must match wits with 10-year-old Artemis. Much craziness ensues. The only complaint i have is that the books always feel a touch rushed, as if the author was told several times to take out any non-action based scenes. I would have been perfectly happy to ease a bit more into this one, as the last one had Artemis coming back from a lost-in-time/space colony 3 years after he'd left. It would hav…
3 comments
Read more

- August 17, 2008
I saw My Morning Jacket Friday downtown at Riverfront Park. They were incredible! If you get a chance to see these guys live take it. No opening band which was a bit different. I knew I liked the stuff from their new album as Left of Center on Sirius radio has been playing it constantly but I had no idea how much of their older stuff I knew. The weather was great, the crowd was really into it, and i had a great time with R. all in all, a good day.
Post a Comment
Read more

- August 15, 2008
I had a visit from the wonderful cable man today. I have internet at the apartment! WOO HOO! And i am gorging myself on Sportscenter. Oh, how i've missed your wisecracking commentary. How did i survive without knowing which plays made the Top Ten every day? How many mascot mishaps did I miss? Who's sucking in preseason football? How far back are the Yankees? ack!!

And to really really get me celebrating i finished The Shock Doctrine by Naomi Klein this morning. The second half of the book goes much faster than the first, as it covers modern American politics and policies since 2000. So I actually know about plenty of it, like Bremer's misadventures in Iraq. (i am going to take a second to pimp my favorite Iraq book, Babylon by Bus. when two guys whose regular job was selling bootleg tshirts at Red Sox games come off as more qualified to run government departments than the people who are being paid to do so, you are in a sorry sorry state) But for the last part to …
Post a Comment
Read more

You, um, may have noticed that the Olympics are going on right now, so that’s the genesis of this week’s question, in two parts:
First:
Do you or have you ever read books about the Olympics? About sports in general? Fictional ones? Or non-fiction? Or both?
And, Second:
Do you consider yourself a sports fan? Because, of course, if you’re a rabid fan and read about sports constantly, there’s a logic there; if you hate sports and never read anything sports-related, that, too … but you don’t have to love sports to enjoy a good sports story.


On the first question, I'd say i can't remember reading anything about the Olympics or olympic type sports. I have probably read a few books, probably fiction, centered on sports but the only ones i can think of right now are Playing for Pizza by John Grisham, one about football in Italy which i didn't like much and was the last time I'll bother with grisham. I had to read The Natural in high school …
3 comments
Read more

Next, I finished up my second book by Peter Stamm, Unformed Landscape. This was shorter than On A Day Like This and it also had a much smaller feel to it. Our protagonist is Kathrine, a woman who lives in a small Norwegian fishing village. She has a young school age son, a husband she never loved, a job as a customs inspector. She's kind of hard to get as she doesn't seem to care about her son much, or her mother except in a distracted way. But she isn't self-centered, it is more that she is drifting, doing what is expected because it would be too much trouble to do otherwise. Then she has a one night stand with a friend, after which she finds out her husband has lied about every detail of his life before he met her: his schooling, travel, languages known, etc. So she drops the boy (which is how we hear about her son until the end) with her mother, leaves her life and begi…
1 comment
Read more

- August 10, 2008
Courtesy of Huffington Post, lots more pretty charts on why Democrats are better for the economy than Republicans, no matter how you slice it!
Post a Comment
Read more

Take a peek. I personally have no problem with those top 2 groups paying more taxes. From politicalpeon.com

- August 07, 2008
This week's question is about settings. I havent' done this in a few weeks; life has been crazy and the last couple questions just didn't inspire me.

Are there any particular worlds in books where you’d like to live?
Or where you certainly would NOT want to live?

Places I'd want to live: Valdemar, from the Mercedes Lackey series; Anne Rice's New Orleans: the Japan of the Otori series by Lian Hearn; Lyra's world in Philip Pullman's His Dark Materials series; being a witch in Harry Potter's Europe would be cool.

Places I'd really rather not: Victorian England in pretty much any universe, but particular the girl's school environment of Libba Bray's novels; The Future in Fahrenheit 451 or 1984 or The Road; Roland's world in The Dark Tower series by Stephen King.

On another note, i am reading The Shock Doctrine by Naomi Klien and I can't wait to be done. This is a very interesting book but it is so heavy, physically and psychically. i…
1 comment
Read more

- August 01, 2008
Yesterday since i had nothing to do after work for once (seriously, trying to go on dates is time consuming) i just read. Period. I finished up two YA books between dog walks.

I liked Once Upon a Time in the North By Philip Pullmanmuch more than Lyra's Oxford. North is the story of how 24-year-old Lee Scoresby meets Iorek Byrnison. What could be better than a bit about my 2 favorite characters, besides Lyra and Will, from the HDS series? There's an adventure, political intrigue, aeronautics and the good guys win! This little volume does include some ephemera from the series as Lyra's Oxford did so we find out what Lyra's Master's degree thesis is about. I figure this one is a 6. And according to various sites we are going to get a Will story in the future. Whee!

Also read A Wind in the Door by Madeline L'Engle. This one is also told from Meg Murry's point of view but is also apparently the last one to do so? This one is a 5 I would say. Little Cha…
2 comments
Read more
More posts