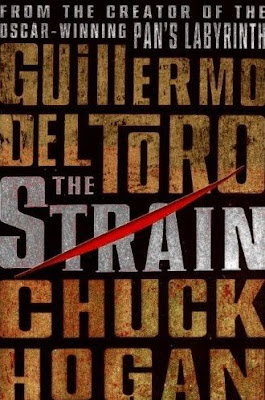 And a review....I picked up 3 books today from the library that i've been waiting forever for. Ok, in reality, i put League of Extraordinary Gentlemen Century: 1910 by Alan Moore and Kevin O'Neill on my request list back in May, just before it got released. It showed "on order" until last Friday when suddenly it said "in transit". Whoopie!

I liked this waaay more than Black Dossier. Black Dossier was just a little too trippy for me. And it jumped so far forward in time that i felt lost. Century: 1910 goes back to the characters as we knew them just after Volume 2. Mina and Quartermain have become immortal; they are still in the League with the gender switching Orlando (from Virginia Wolff's novel), AJ Raffles and Thomas Carnacki. Since there were more characters i didn't know, and until reading the wikipedia entry i didn't understand why several were singing, i guess i got less out of it than i would have otherwise. a 5 from me.

Then, i also picked up The Strain by Guillermo del Toro and Chuck Hogan and The Girl with the Dragon Tattoo by Steig Larsson, both of which were on hold about 2 months or so. since both have long holds (10 and 65, respectively) i'll be reading those two first, pushing my other library books and challenge books to the back for now. hmm, but The Strain can count for RIP! yay!

LIbrary Loot is hosted by Marg at Reading Adventures and Eva at Striped Armchair.
5 graphic novel