- January 09, 2011
No, I'm not sick of the Shakespeare challenge. B got a graphic novel for Christmas and I got to it before he did. He's not been much of a graphic novel fan though he did read Unwritten Vol. 1. I've been trying to get him to pick up the Sandman series since he likes Gaiman. Kill Shakespeare by Conor McCreery, Anthony del Col and Andy Belanger, is a graphic novel that owes a bit to the Fables series and The League of Extraordinary Gentlemen. It's a mashup of Shakespeare's plays, heroes versus villians.
The story opens with Hamlet, having killed Polonius, leaving Denmark. Pirates attack his ship and he gets tossed overboard. He washes up, Tempest-style, in a new land, one where King Richard III works with the MacBeths to keep the peasants downtrodden. Of course, as Richard thinks Hamlet is the Shadow King, the one prophecied to kill Shakespeare, a godlike figure, he doesn't let Hamlet see the bad parts of Richard's kingdom. He gets rescued from Richard by Falstaff, a true believer in Shakespeare as a god figure. Hamlet then meets the leader of the rebellion, one Juliet Capulet.

I liked this one a good bit. I must admit, i've always enjoyed the villians of Shakespeare. They are so complex and when they have major parts in the play always have great speeches. I always volunteered to read Iago whenever we read Othello aloud in school. I love MacBeth enough that i've watched maybe half a dozen different versions. Pick up Kurosawa's which is called Throne of Blood. I do think that this book is going to just make the villians big bad guys but I still can't wait until the next volume. I am seriously considering finding my way back into a comics shop as there are just too many series that i'm enjoying. a 6.

While this does not count for the Shakespeare Challenge i'm going to go ahead and tag it that way as the book may be of interest to Shakespeare fans. oh, and for Weekly Geeks, here's a pic of me reading it! 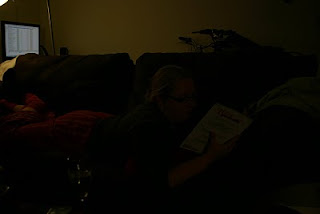