The Ocean at the End of the Lane and Neil Gaiman!

B and I met Neil Gaiman last night! 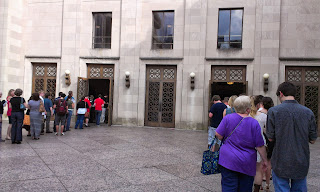 The line to get in 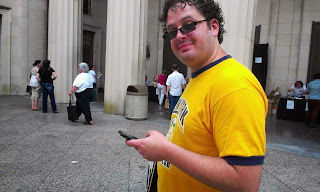 B being patient in the line to get in

It was really great.  We didn't get there until about 5:30 so we had to sit up in the balcony. 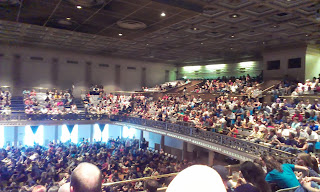 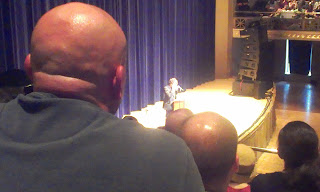 The man himself. Yeah, I happened to be in "shiny bald guy" section

It was crazy warm/humid.  We had a thunderstorm during the event so he read from the portion in the book where the boy is running away from home during a thunderstorm.  There were definitely a few well-timed crashes of thunder that made me have goosebumps.  He did some Q & A which was pretty funny.  Someone actually asked if he and his wife were planning to have any kids.  His answer came down to "none of your business" which, having fielded that question myself from close family to practical strangers, made me want to cheer.  He also brought out Bela Fleck, who accompanied on banjo as he read a bit from Fortunately, The Milk.
B was so incredibly patient.  I definitely did not prepare him properly for the amount of people and the wait we'd have.  We were, in fact, quite lucky.  Rather than just calling out sections in order or taking the earliest people first, they randomly pulled sections/rows. So like section 34, row A, section 5, row P, etc.  They called our row at about 9 pm and we were out about 9:45. 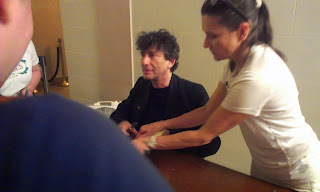 B took the pics, this was the best one of Neil Gaiman 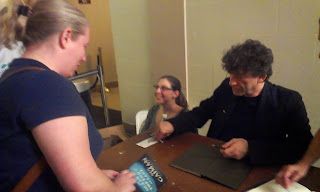 Me saying "thank you" 11 times in 20 seconds and also apologizing for the humidity while Neil Gaiman signs one of my Sandman graphic novels.

Neil Himself was very nice.  It was really hot and he had to be tired but he was just  chugging along.  He even apologized to the woman in front of us about being a stickler about no flash photography; he said if he looks up while the flash goes off then he can't sign anything for five minutes because he can't see.  Who does that?  He was really great.

The book, by the way, is really good.  I put "fantasy" as a tag but it is almost sci-fi. It is hard to describe and other people have done a better job than I would describing it. I'll just say it is dreamy and emotional and heavy.  Read it!
7 fantasy Life