Showing posts from May, 2014
Show all

- May 31, 2014
American Hustle: very good and the ending was not what I was expecting.  I am really glad i was only a very little child in the late 70's as those clothes would not have worked for me.  a 6

In A World: Really funny movie about women in the film industry, specifically the voice-over market.  See anything Lake Bell does, she's fabulous. a 7

Fast and Furious 6: I watched this one with my dad when I went on a trip to Louisiana.  As I have never seen any of the other ones, I really had very little sense of what was going on.   Anna Lucia came back from the dead and there were 'splosions.  a 4.

X-Men: Days of Future Past: a really great story and very cool movie.  Wish they had mentioned why exactly Kitty Pryde's powers could send someone back in time.  Very good commentary on women's agency.  a 7.

Dallas Buyer's Club:  another really good movie.  not as sad as I was expecting.  a bit too promoting of pseudoscience but I liked it.  a 6.
Post a Comment
Read more

I write up short reviews for the books I read during the Readathon! 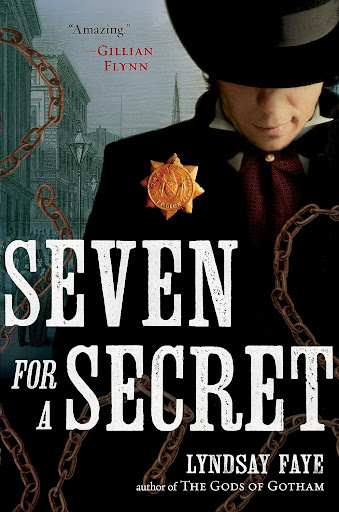 Yeah, finally, I know.  Life has been pretty hectic around here.

Book of Ages: The Life and Opinions of Jane Franklin by Jill Lepore:  This book is a non-fiction work about Ben Franklin's sister, Jane, derived from many letters and other documents.  Ben was several years older but the two were very close.  She became a wife and mother before the age of 18, had a pretty pitiful husband, suffered the loss of multiple children/grandchildren, and lived through the Revolutionary war.  The letters show what life was like for a woman in the 18th century. Things like how important marrying a decent worker was, how unhealthy the atmosphere was, how hard it was for her to just read and write.  So much of her letters are lost and most of what was kept was because it was to her brother.  a 6.


Seven for a Secret by Lyndsay Faye:  a sequel to The Gods of Gotham which I liked.  In this one, Timothy Wilde (who I picture as Shane West for some reason) and his brother Val, also a police officer, h…
1 comment
Read more

Relisten to Harry Potter 1 and 2!

While I should probably be listening to YA novels (or kidlit) that I have yet to read, in an attempt to catch up on some of the novels that are missing from my repertoire, I've fallen back into a Harry Potter reread.  Tor.com is hosting a reread and, though they are only doing a couple chapters a week, it is fun to follow that.  I have listened to Sorcerer's Stone and Chamber of Secrets so far.  These books are just so easy to listen to; Jim Dale is an amazing narrator.

I've really enjoyed this reread.  I've been trying to keep the later books in mind while I am listening to these early ones.  I have heard parallel after parallel and bits of foreshadowing are everywhere.  For a first and second novel, these books are so well-crafted and Rowling clearly had the main narrative of the series in mind from the beginning.  It is strange that I always think of Chamber of Secrets as my least favorite book and then, when I reread it, I find I quite like it.  I think it is just …
Post a Comment
Read more

12 Years a Slave: Hard to watch but not as hard as I was worried it would be.  I think it is important to watch.  a 7.

The Wolf of Wall Street:  I liked this better the first time around when it had more killing and Joe Pesci and was called Goodfellas.  It was at least 30 minutes too long and I didn't particularly care about what was going on.  a 4.

And squeaking in on April 30, Captain America: The Winter Soldier:  Loved the movie but the subtitle is a bit misleading.  Trying to decide on a different one but everything is either spoilery or already used.  I really thought this was a great movie.  I did wonder why Hawkeye wasn't even mentioned but I hope he was uncontactable on a mission somewhere.  More Black Widow info, more Captain development, this felt more like an Avengers sequel than either Iron Man 3 or Thor 2, though both of those did r…
2 comments
Read more
More posts