Showing posts from July, 2014
Show all

- July 31, 2014
Nebraska: B and I both liked this one. Kinda sad story about aging and life and loss of expectation.  a 6. Nothing Lasts Forever: have you heard about the "lost" Bill Murray movie from the '80's?  this is it.  I watched it so you don't have to!   it was pretty bad. Bill Murray as a flight attendant on a flight to the moon was the best thing in it.  Dan Akroyd as an armed tunnel worker was the second best thing.  The story was nonsensical.  a 2. Room 237:  a documentary about all the theories people have about what The Shining was really about.  It was fascinating.  The filmmaker never showed the various people but only had their audio playing over Kubrick films, The Shining and others.  Every theorist was so sure their theory was correct and never questioned that the fact that they believed it.  But each person saw their theory from their own background.  The guy who was a WW2 history scholar saw the movie as a Holocaust film.  The guy who grew up in the wes
Post a Comment
Read more

- July 19, 2014
Quickies!  Fortunately, the Milk by Neil Gaiman - of course this one was awesome.  really funny story about a dad's adventures when he goes out for milk for the kids' breakfast.  a 6.  Hatchet by Gary Paulsen - A perfect "boy" book.  Teen boy is the only survivor of a light plane crash.  He has to survive in the woods of Canada alone, with a hatchet as his only tool.  I thought the ending was a little too deus ex machina but on the whole it was not bad.  a 5. The Mighty Miss Malone by Christopher Paul Curtis : book about an African American girl, Deza Malone, growing up during the Depression.  This wasn't a book for me.  The girl is our first person narrator but never really does anything, just speaks about all the things that happen around her.  She's very naive. Also, she kept saying "geologically" when she meant "geographically" and it really got on my nerves.  a 4. Emmy and the Incredible Shrinking Rat by Lynne Jonell : tryi
Post a Comment
Read more 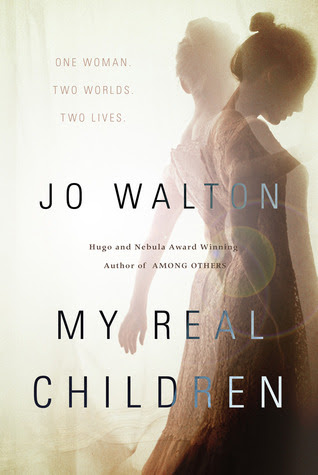 I read two books recently that I felt were a wonderful pair to read at the same time.  Both take place in England and cover portions of the 20th Century.  Both concentrate on women's rights, roles, and expectations during this time.  Both were fantasy/sci-fi novels that deal with multiple lifetimes.   My Real Children by Jo Walton is the shorter book.  Patricia was born in 1926 and it is now 2015.  She now has dementia and lives in a nursing home.  She's remembering back over her life but remembers two separate lives.  In one, she got married young, left her work behind, had a miserable marriage and four children.  In the other, she didn't get married, entered a long-term relationship with a woman, was incredibly happy, and had three children.  It isn't just her personal history that is different.  In the married timeline, things for the world are better: the Cold War ended earlier, people were more accepting (gay marriage became legal) and there are moon colo
Post a Comment
Read more
More posts